(NASA) – If it’s time for a meteor shower, you won’t need a telescope, binoculars, or a high mountain to have a “star gazing” party. You might need a warm sleeping bag and an alarm clock to wake you in the middle of the night. But then just lying down in your own back yard will put you in the perfect spot to enjoy a great light/night show.

A meteor is a space rock—or meteoroid—that enters Earth’s atmosphere. As the space rock falls toward Earth, the resistance—or drag—of the air on the rock makes it extremely hot. What we see is a “shooting star.” That bright streak is not actually the rock, but rather the glowing hot air as the hot rock zips through the atmosphere.

When Earth encounters many meteoroids at once, we call it a meteor shower. 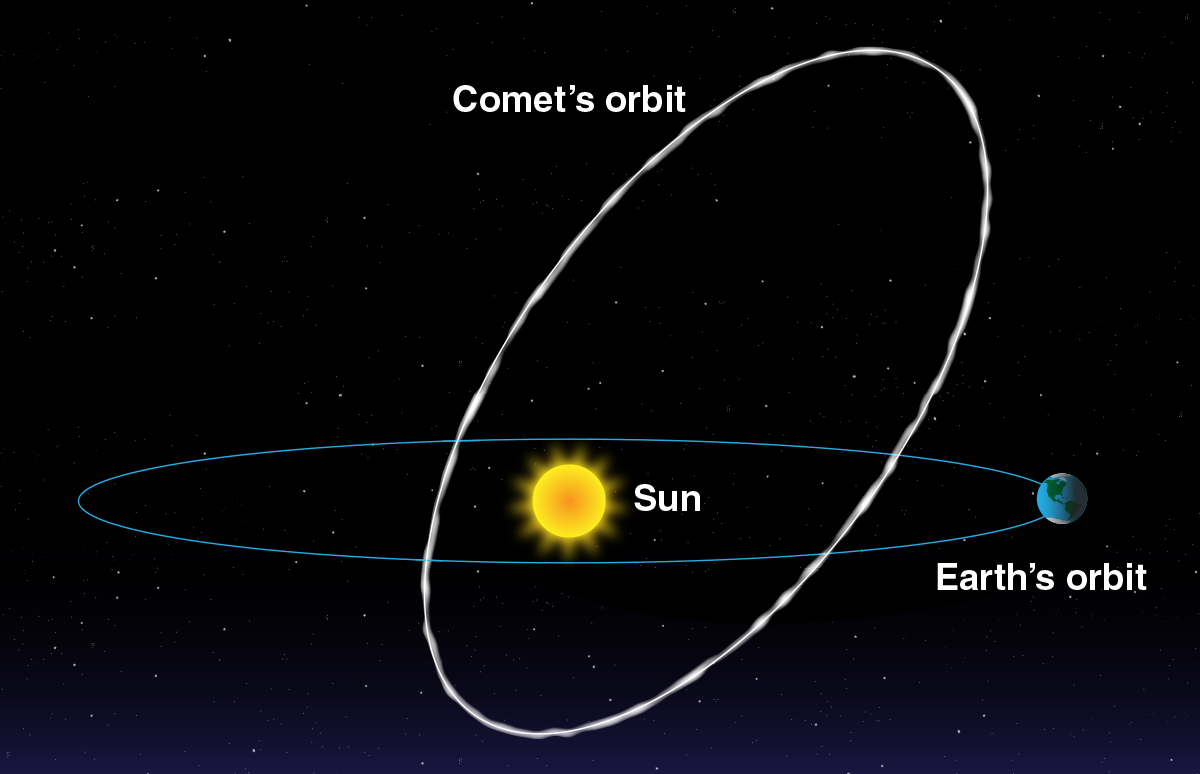 Why would Earth encounter many meteoroids at once? Well, comets, like Earth and the other planets, also orbit the sun. Unlike the nearly circular orbits of the planets, the orbits of comets are usually quite lop-sided.

As a comet gets closer to the sun, some of its icy surface boils off, releasing lots of particles of dust and rock. This comet debris gets strewn out along the comet’s path, especially in the inner solar system (where we live) as the sun’s heat boils off more and more ice and debris. Then, several times each year as Earth makes its journey around the sun, its orbit crosses the orbit of a comet, which means Earth smacks into a bunch of comet debris.

But not to worry!

The meteoroids are usually small, from dust particle to boulder size. They are almost always small enough to quickly burn up in our atmosphere, so there’s little chance any of them will strike Earth’s surface. But there is a good chance that you can see a beautiful shooting star show in the middle of the night!

In the case of a meteor shower, the glowing streaks may appear anywhere in the sky, but their “tails” all seem to point back to the same spot in the sky. That’s because all the meteors are coming at us at the same angle, and as they get closer to Earth the effect of perspective makes them seem to get farther apart. It’s like standing in the middle of railroad tracks and seeing how the two tracks come together in the distance.

Here are dates of major meteor showers. Peak viewing times will vary by a day or two each year. Keep in mind: If the moon is full or near full, you may not see many meteors. Some years are better than others for numbers of meteors per hour.

‘We will be ready’: Capitol Police prepare for Saturday rally

‘Pandemic in a pandemic’: New push in Congress aims to prevent health care worker suicides as COVID rages on

Race to raise US debt limit: Republicans say Democrats are on their own

CS Global Group, a Turkish mining company, specializes in barite manufacturing and sales. It is locating its first U.S. manufacturing plant in Moundsville.

(WTAJ) — A popular drug to curb smoking habits is being recalled over consumer safety concerns.

Pfizer has announced a voluntary recall of all batches of Chantix 0.5 mg and 1 mg tablets due to the presence of an amount of nitrosamine above the Food and Drug Administration's acceptable limit.

FREDERICKSBURG, Ohio (WJW) -- Green Field Farms Dairy of Fredericksburg says they are issuing a voluntary recall of its whole chocolate milk product because it was not effectively pasteurized.

Over one thousand units of the affected product were distributed in Ohio, Indiana, Kentucky, Maryland, New Jersey, New York, Pennsylvania, Virginia, Delaware and Washington DC from Sept. 7 through Sept. 16.

Mark your calendar: When you can see Ohio’s fall leaves at their peak

All but 6 Kentucky public school districts have universal masking requirements

3 new COVID-19 deaths in Boyd County, more than 860 cases so far in September

What is the likelihood of death after being fully vaccinated for COVID-19?

What is the likelihood of death after being fully vaccinated for COVID-19?